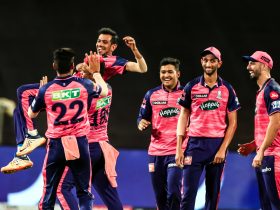 Delhi Capitals won a high-scoring match against Sunriesers Hyderabad. After a frustrating loss against Lucknow Super Giants, Delhi Capitals are back on the winning track. Last night, they beat Sunrisers Hyderabad by 21 runs. In this match, David Warner played a superb innings as he remained not out in 92 runs. It is his highest score in this tournament.

On the other hand, Sunrisers Hyderabad lost their track. They have lost three games in a row. The defeat against Delhi Capitals moved them to 6th place. Moreover, it will be very difficult for the SRH to secure a place in the semifinals.

Kane Williamson, the captain of Sunrisers Hyderabad, won the toss and decided to bowl first. So David Warner and Mandeep Singh started the batting innings for Delhi Capitals. But their starting was not very fruitful as Mandeep Singh lost the wicket in the first over. He departed the pitch in Bhuvenshwar Kumar’s over without scoring a run. David Warner, the other opener, tried to make a partnership with the new batsman, Mitchell Marsh. They added 37 runs together on the scoreboard. However, Marsh lost the wicket after scoring 10-runs for the team.

On the other side, David Warner continued scoring runs. He made another partnership of 48 runs with the skipper, Rishabh Pant. Unfortunately, the captain had to go back to the pavilion after adding 26 runs. After that, Warner made a brilliant partnership with Rovman Powell. They both were not out in this match. Relying on these runs, Delhi Capitals set a massive target of 208 runs for the Hyderabad.

Chasing the target, the two openers of Sunrisers Hyderabad couldn’t have a good start. Abhishek Sharma departed after scoring 7 runs, while Kane Williamson added 4 runs before losing the wicket. After that, the following three batsmen tried hard to overcome the initial disaster. Especially, Aiden Markram and Nicholas Pooran played the most effective innings for the Sunrisers Hyderabad. Pooran scored the highest 62 runs from 34 balls only. Meanwhile, Aiden Markram added 42 runs for the team. But their efforts didn’t work out as they lost their wickets after a few overs. As a result, Hyderabad couldn’t score more than 186 runs in 20 overs. So, Delhi Capitals won the match by 21 runs.