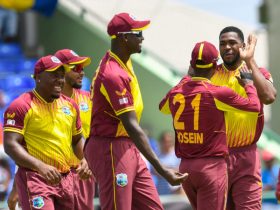 Bangladesh Women’s Cricket team is flying in the ICC Women’s T20 World Cup Qualifiers. They have got their third successive victory in the qualifying round. Today, Bangladesh faced the USA Women’s Cricket Team at Sheikh Zayed Stadium, where they defeated the USA by 55 runs.

Nigar Sultana, the captain of Bangladesh Women, won the toss and opted to bat first against the USA Women. So, Shamima Sultana and Murshida Khatun came into the pitch to start the innings for Bangladesh. Bangladesh have been suffering to build a long partnership on the opening wicket for many years. The same thing happened today. Against the USA, Bangladesh failed to establish a decent partnership. They lost the first wicket in the 4th over as Shamima Sultana departed the pitch after being bowled out by Snigdha Paul.

Defending the target, Bangladesh Women had a flying start as they picked up the first wicket of the USA in the very first over. Snigdha Paul, the opener batter of the USA, lost her wicket without scoring any runs. After that, Disha Dhingra tried to tackle the disaster with the new batter, Sindhu Sriharsha. Unfortunately, they couldn’t make a partnership as Disha Dhingra left the pitch after being run out in the 4th over.

The USA lost another wicket in the next over. This time, Bangladeshi bowler Nahida Akter picked up Anika Kolan in the 5th over. Sindhu Sriharsha, however, remained very strict on the crease. She continued scoring runs. With Lisa Ramjit, Sindhu added 91 runs on the scoreboard. Unfortunately, that was not enough to chase the target. Bangladesh tied up the USA Women in 103 runs. Therefore, Bangladesh Women’s Cricket Team beat the USA by 55 runs and registered their 3rd successive victory in the ICC Women’s T20 World Cup Qualifiers.