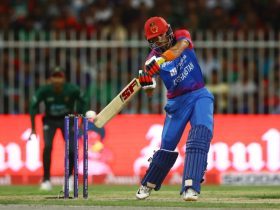 Afghanistan have secured a place in the Super Four

Nicholas Pooran, the captain of the West Indies, won the toss at Kensington Oval and decided to bowl first in the 1st ODI. So, Martin Guptill and Finn Allen came into the pitch to start the innings for New Zealand.

Both batsmen had a slow start as they batted very carefully. They added 41 runs together in the opening partnership. Then Finn Allen lost his wicket after scoring 25 runs. After a while, Martin Guptill lost his wicket to Akeal Hosein in the 11th over.

After that, captain Kane Williamson tried to build a partnership with Devon Conway. But Conway couldn’t stay long on the pitch. Caribbean spinner Akeal Hosein took that wicket in the 15th over. The next two batters also failed to contribute much. But Williamson kept trying hard to make a good result. Unfortunately, he couldn’t go far enough. Williamson departed the pitch after scoring 34 off 50 balls. Also, Michael Bracewell and Mitchell Santner contributed 31 and 25 runs, respectively. Relying on their runs, New Zealand scored 190 in 45 overs.

Defending the score, New Zealand had a brilliant start. They picked up the first wicket in the 3rd over. A few moments later, Shai Hope also lost his wicket after scoring 26 runs for the team. Then Sharmarh Brooks came into the pitch. His brilliant batting changed the scenario. Brooks made a partnership of 37 runs with Keacy Carty.

But, Sharmarh Brooks made the most fruitful partnership with the skipper, Nicholas Pooran. They added 75 runs together on the scoreboard. Their brilliant partnership made it easy for the remaining batter to chase the target. However, Sharmarh Brooks departed the pitch after scoring the highest 79 runs for the team. But Jason Holder added the remaining runs with Jermaine Blackwood to win this match.