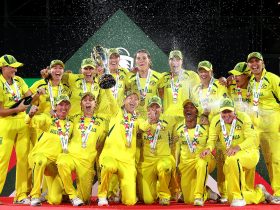 India Women’s Cricket Team started their journey in the Asia Cup 2022 with a stunning victory against Sri Lanka. Today, they faced the Lankan at Sylhet International Stadium, where India beat the Lankan by 41 runs. Jemimah Rodrigues received the Player of the Match award for her brilliant batting display.

Chamari Athapaththu, the captain of Sri Lanka Women, won the toss and opted to bowl first. So, India started their batting innings with Shefali Verma and Smriti Mandhana. But, both openers couldn’t build a long partnership on the opening wicket. Smriti Mandhana departed the pitch in the 3rd over. Shefali Verma also failed to survive for a long time. She lost her wicket to Oshadi Ranasinghe in the 4th over.

After that, Jemimah Rodrigues handled the initial disaster with the skipper, Harmanpreet Kaur. Both batters looked very comfortable on the crease. They made a brilliant partnership of 92 runs for the team. Although Harmanpreet Kaur lost her wicket after scoring 33 runs, Jemima Rodrigues didn’t miss the half-century. She made another partnership of 19 runs with Dayalan Hemalatha.

However, Jemimah Rodrigues’ brilliant innings came to an end in the 18th over. Lankan skipper Chamari Athapaththu picked up her wicket in that over. But Jemimah Rodrigues scored the highest 76 runs from 53 balls only. Relying on her bat, India scored 150 runs in 20 overs.

Chasing the target, Sri Lanka got a good start. They scored 25 runs in three overs. But Deepti Sharma gave the first breakthrough for India as she picked up Chamari Athapaththu in the 4th over. The next batter, Malsha Shehani, also failed to contribute much. She left the pitch after being run out in the 6th over. In addition, opener Harshita Samarawickrama also left the crease after being run out. However, she scored 26 runs before losing the wicket.

After that, Hasini Perera tried hard to chase the target. She fought for her life to get a good result. Hasini Perera scored the highest 30 runs for the Lankans. But the other batters couldn’t contribute much to the team. Therefore, Sri Lanka became all out in 109 runs. As a result, India won their first match in the Asia Cup by 41 runs.