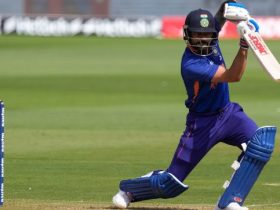 Sri Lanka Women won the three-match T20 series by defeating India in the 3rd T20. The third match was the series-deciding match, as both teams had won one game. However, Sri Lanka beat the visitors by 7 wickets and sealed the series.

Harmanpreet Kaur, the captain of India Women, won the toss and decided to bat first at the Rangiri Dambulla Stadium. But the visitors couldn’t start their innings in style as they lost the first wicket in the first over. Opener Shefali Verma departed the pitch in the 1st over after scoring only five runs.

Smriti Mandhana, the other opener, tried to build a partnership with the new batter, Meghana. They added 41 runs together on the scoreboard. It seemed they were heading to a big score. But Lankan bowler Oshadi Ranasinghe picked up the wicket of Smriti Mandhana to break the partnership. Smriti Mandhana returned to the pavilion after scoring 22 runs.

In the following over, India lost another wicket as S. Meghana departed the pitch. She scored the same run as Smriti Mandhana did. However, Harmanpreet Kaur tried to tackle the disaster with Jemimah Rodrigues. Together they added 64 runs on the scoreboard. Unfortunately, Jemimah Rodrigues lost her wicket in the 19th over, while Harmanpreet Kaur remained not out in 39 runs. Depending on these runs, India scored 138 runs in 20 overs.

The Lankan captain was also aggressive on the pitch. She hit fourteen boundaries and one six in her innings. Moreover, Chamira Athapaththu remained not out in the 3rd T20. She scored an unbeaten 80 runs for Sri Lanka. In addition, Nilakshi de Silva added 30 runs in the lower order. As a result, Sri Lanka chased the target in 17 overs and won the series against the Indian Women Cricket Team.