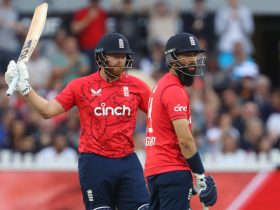 Last night teams from the European zone played their 8th match in the FIFA World Cup qualifiers. Portugal destroyed Luxembourg as Cristiano Ronaldo scored a hat-trick in this match. On the other hand, Hungary shocked England at the Wembley Stadium.

Portugal welcomed Luxembourg at the Estadio Algarve, where they beat Luxembourg 5-0. Portugal captain Cristiano Ronaldo scored a brilliant hat-trick in this match. It is his 10th hat-trick for  Portugal. Moreover, Ronaldo has become the all-time leader in men’s international hat-tricks. He has also scored 53 goals in his last 51 for his country. Now, Ronaldo has 114 goals for his country, Portugal.

In the 6th minute of the game, Luxembourg’s defender fouled Bernardo Silva inside the box. As a result, Portugal got a penalty at the very beginning of the match. Cristiano Ronaldo took the penalty kick and scored the first goal. Within four minutes, Portugal got another penalty as the goalkeeper of Luxembourg fouled Ronaldo. Once again, Ronaldo took the penalty and made no mistake.

Manchester United midfield maestro Bruno Fernandez wrote his name on the scoresheet as he scored in the 17th minute for Portugal. Bernardo Silva passed the ball towards Bruno Fernandez. Bruno’s bullet shot found the net. However, Bruno Fernandez helped Joao Palhina to score the fourth goal in the 69th minute.

In the 87th minute, Cristiano Ronaldo scored his third goal in the match. Ruben Neves crossed the ball into the box. Ronaldo was there to head the ball. His powerful header was unstoppable for the goalkeeper. As a result, Ronaldo completed his hat-trick and became the highest hat-trick holder in men’s international football.

England welcomed Hungary at Wembley Stadium last night. The 40th team in the FIFA ranking stopped England from winning in England’s home ground. The match between Hungary and England ended in a 1-1 draw. However, England remains at the top of the point table in Group I.

England boss Gareth Southgate set up the formation with 4-3-3. However, England conceded the first goal in the 24th minute from a penalty shoot-out. Left-back Luke Shaw fouled Ronald Sallai inside the box. As a consequence, Hungary got a penalty shot and scored from this. In the 36th minute, England center-back John Stones equalized with a superb goal. He scored from Phil Foden’s brilliant free-kick. But England could not score in the remaining minutes. They created some good chances in the second half but failed to score.