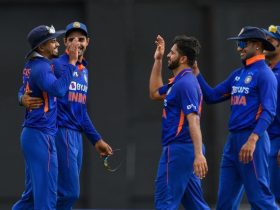 Zimbabwe created history by defeating Australia by three wickets at Riverway Stadium. Today, they faced Australia in the final game of the three-match ODI series, where the world witnessed the supremacy of the Zimbabweans. Spinner Ryan Burl destroyed the Aussies alone by taking five wickets in this match. Although Zimbabwe won the third game, Australia sealed the series by winning the first two.

Australia welcomed Zimbabwe to play a three-match ODI series. Today, they faced off at the Riverway Stadium in the third match. In this match, Zimbabwean captain Regis Chakabva won the toss and decided to bowl first. So, David Warner came onto the pitch with Aaron Finch to start the innings for Australia.

Both batters were very careful from the start of the match. But despite being so defensive, they couldn’t make a long partnership. Aaron Finch, the T20 captain of Australia, lost his wicket to Richard Ngarava in the 5th over. The skipper scored only 5 runs for the team before his departure.

Don’t miss:  Pakistan got a stunning victory against West Indies

Australia, the home team, lost another wicket in the following over. Former Aussie captain Steven Smith left the pitch, scoring only one for the team. However, opener David Warner tried very hard to build a partnership. But, the other batters couldn’t help him much. Glenn Maxwell was the only batsman with whom David Warner added 30+ runs on the scoreboard. Together they added 57 runs for the team. Unfortunately, Maxwell lost his wicket in the 27th over, scoring 19 runs.

After that, the disaster started for the Aussies. From 129 to 141 runs, Australia lost five wickets due to the aggression of Ryan Burl. All those batters failed to cross 10 runs in this match. However, David Warner fought alone. His 94 runs helped Australia to score 141 runs in this match.

Chasing a small target, the Zimbabweans got a decent start. The two openers, T. Kaitano and T. Marumani, were very calm on the crease. They added 38 runs on the opening partnership. But Zimbabwe were under pressure after losing two wickets in the 11th over. But captain Regis Chakabva was rock solid on the crease. His unbeaten 37 off 72 balls earned a historic victory for Zimbabwe.