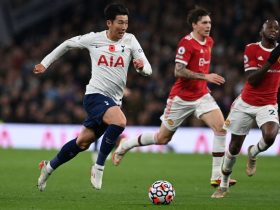 Arsenal have returned to the top of the table as they just have defeated Brentford FC at the Gtech Community Stadium, where the Gunners scored three goals against the home team. Having lost to Manchester United in their previous game, Arsenal is back on track with this match against Brentford FC.

Arsenal traveled to the Gtech Community Stadium to play against the home team, Brentford FC. This match was very crucial for the Gunners to get back to the top of the table. So, Arsenal’s boss didn’t make any experiments on his squad in this game. He played his best possible XI against Brentford.

Mikel Arteta, the manager of Arsenal, set up the team formation with 4-2-3-1. Unfortunately, he missed the service of Martin Odegaard due to an injury. So the manager replaced him with Fabio Vieira in the midfield. On the other hand, Brentford’s boss played his team in a 3-5-2 formation. He used two wing-backs with three center-backs.

As the home team, Brentford FC tried to dominate in the first half. But eventually, Arsenal took control of the match. The Gunners took only 19 minutes to open the scoresheet. Defender William Saliba converted Bukayo Saka’s corner kick into a goal with a brilliant header.

Scoring the first goal, the Gunners played more aggressively. They created so many chances in the first half. Finally, Arsenal doubled their lead in the 28th minute as Gabriel Jesus found the net with the help of G. Xhaka. The goal makes Gabriel Jesus’ tally for Arsenal in seven games to four.

However, Brentford tried hard to return one. But the defense of Arsenal was rock solid. Arsenal’s defender didn’t give space to Brentford’s strikers. So, the first half ended in 2-0.

Returning from the break, the Gunners kept pushing the opponents as they did in the first half. Therefore, Arsenal didn’t take much time to score in the 2nd half. Within five minutes of the second half, Arsenal got another goal. Fabio Vieira scored the goal with Bukayo Saka’s assist. Unfortunately, the home team couldn’t find the net in the remaining minutes. As a result, Arsenal sealed the victory and have returned to the top of the table.