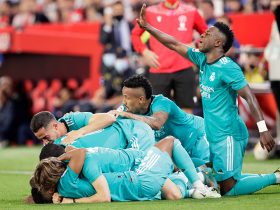 Last night, Celta Vigo got a stunning victory against Cadiz at Balaidos Stadium, the home of Celta Vigo. They defeated Cadiz by a three-goal margin. As a result, Celta Vigo have moved to 6th place after this victory. Meanwhile, Cadiz remained at the bottom of the table as they are yet to get points in the league.

Cadiz traveled to Balaidos Stadium to play against the home team, Celta Vigo. Eduardo Coudet, the manager of Celta Vigo, set up the team formation with 4-1-3-2 to face Cadiz. He deployed Iago Aspas and Carles Perez in the front. On the other side, Cadiz manager Sergio played his team in a 4-1-4-1 formation.

Both teams played slow and defensive football in the first half. They were more focused on keeping possession. Although Celta Vigo created some good chances, they failed to find the net. As a result, the first half ended in 0-0 as both teams failed to open the scoresheet.

Returning from the break, the home team changed their style of playing. They played relatively better than in the first half. As a result, Celta Vigo got a goal at the very beginning of the second half. Vigo striker Iago Aspas opened the scoresheet as he found the net in the 56th minute with the help of Gabri Veiga.

Scoring the first goal, the home team didn’t stop pressing. They doubled their lead within 10 minutes from the first goal. This time, midfielder Oscar Rodriguez beat Cadiz’s goalkeeper to find the net. Jorgen Strand Larsen, who came off the bench in the 46th minute, assisted on that goal.

Conceding two goals in ten minutes, the visitors lost track and became a bit shaky in defense. They tried to score from the counterattack, but the result went bad for the visitors. Cadiz conceded the third goal as Iago Aspas found the net in the 75th minute to complete his second goal.

However, both teams couldn’t score more in the remaining minutes of the 2nd half. As a result, Celta Vigo sealed victory at their home and now are standing in 6th place. In contrast, Cadiz have lost all four matches in their first four games in La Liga. Athletic Club played against Getafe FC in the midweek of ... The first El Clasico of the season took place at ...