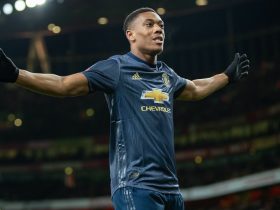 Anthony Martial is on his way to Sevilla FC

Erling Haaland is one of the best young talented players in the current football. His goal-scoring capability attracted many top clubs in Europe. But Manchester City have always been leading the race to sign Haaland. Finally, they are going to get the Norway International.

Since Sergio Aguero left Manchester City, Pep Guardiola has been playing without a proper number nine. But the Citizens didn’t sign a striker as they couldn’t find a perfect one. Now, Man City have a genuine striker who can fill Aguero’s shoes.

There was a rumor that the release clause of Erling Haaland is €75m, which was not true. Borussia Dortmund set a release clause of €60m for Haaland. However, Manchester City have agreed to pay the amount. Erling Haaland already completed his medical test in Belgium in order to join Man City. In addition, Haaland will sign a five-year contract with Man City. Anyway, Haaland will be one of the highest-paid players in Man City. He will earn around £375,000 per week, which is the same as Man City midfielder Kavin de Bruyne.

Erling Haaland is famous for his goal-scoring ability. He is considered one of the deadliest strikers in the current football world. His stats also give proof of this. Since joining the Borussia Dortmund, Erling Haaland has played 88 games from where he scored 85 goals. He has a very dominating record in the UEFA Champions League for Borussia Dortmund. Haaland scored 10 goals in his 8 appearances in the previous season. Unfortunately, he couldn’t play many games this season in the UCL due to injuries. But Haaland was very active in the Bundesliga. From 23 matches, the Norweigen netted 21 goals for the BVB.

Manchester City have confirmed the agreement with Borussia Dortmund to sign Erling Haaland. They have released an official statement. They said,

Manchester City can confirm that we have reached an agreement in principle with Borussia Dortmund for the transfer of striker Erling Haaland on July 1st.