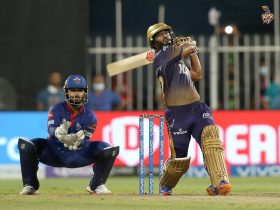 Ben Stokes, who played the most vital role in winning the ICC ODI World Cup 2019 for England, has taken retirement from the ODI format. The match against South Africa was his last ODI game in England’s jersey. But, England couldn’t earn the victory to give Stokes a happy ending. They lost the match against the Proteas by 62 runs.

England welcomed South Africa to play a three-match ODI series. Yesterday, the series started with the first match at the Riverside Ground. South Africa’s skipper Keshav Maharaj won the toss in this match and decided to bat first. So, Janneman Malan and Quinton de Kock came off the pitch to start the innings for the Proteas.

From the beginning, they started playing very carefully. Both openers were a bit slow in the powerplay. However, they picked up 35 runs in the opening partnership. But their partnership broke in the 7th over as Quinton de Kock lost his wicket to Sam Curran.

After that, Janneman Malan made a brilliant collaboration with the new batter, Rassie van der Dussen. Their run rate started rising when Van der Dussen came into the pitch. Together they added 109 runs on the scoreboard. However, Janneman Malan left the pitch after scoring 57 runs. On the other hand, Rassie van der Dussen kept scoring runs. He made another partnership of 144 runs with Aiden Markram. Markram scored 77, while Van der Dussen stopped in 134 runs. Relying on their bats, South Africa set a massive target of 334 runs for England.

Chasing the massive target, England had a flying start. Jason Roy and Jonny Bairstow seemed very confident in chasing the runs. They added 102 runs in the opening partnership. Then, Jason Roy lost his wicket to Keshav Maharaj. After a while, Jonny Bairstow followed the same path. He left the pitch after scoring 63 runs.

However, England lost track since they lost their two openers. They kept losing wickets. But Joe Root tried to handle the situation. He tried hard, but the remaining batters couldn’t contribute much. Root lost his wicket in 45th over, scoring 86 runs. After that, the remaining batters couldn’t score enough to win the match. They became all out in 271 runs. As a result, South Africa won the first ODI of the series by 62 runs.