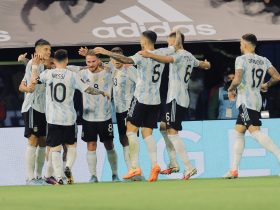 The quarter-final rounds of the Coppa Italia ended last night. Inter Milan, AC Milan, Juventus, and Fiorentina have secured their places in the semifinals of this tournament. AC Milan defeated Lazio by a wide margin last night. Meanwhile, Juventus and Fiorentina also won in their respective matches.

AC Milan welcomed Lazio at their home ground, San Siro, to play the quarter-final of Coppa Italia. As the home team, the Rossoneri got a massive crowd over the stadium. In this match, the Milan boss Stefano Piolo set the team formation of 4-2-3-1. On the other side, Lazio’s boss played his team in a 4-3-3 formation.

AC Milan dominated on their home ground from the beginning of the game. They were too aggressive whenever they got the ball. As a result, the home team took the lead in the 28th minute. Left-winger Rafael Leao scored that goal for the Rossoneri.

The home team scored two more goals just before the half-time break. In the 41st minute, Olivier Giroud, the ex-player of Chelsea, netted the ball for AC Milan. Five minutes later, he hit again. Giroud scored his second goal with the help of Rafael Leao. The visitors couldn’t score a goal in the first home.

In the second half, Lazio had more possession on the ball. But it didn’t help scoring goals for the visitors. Moreover, they conceded again at the end of the game. Frank Kessie netted that goal for the Rossoneri in the 79th minute. However, both teams couldn’t score more in the remaining minutes. So, AC Milan won the match and have qualified for the semifinal.

The match between Atalanta and Fiorentina was quite thrilling. Both teams played very attacking football at Atleti Azzurri d’Italia. In this match, the home team, Fiorentina, took the lead in the 9th minute from a penalty kick. K. Piatek took that penalty shoot and made no mistakes.

However, Atalanta managed to overcome this, scoring two goals in the 30th and 56th minute. Davide Zappacosta found the equalizing goal before halftime. Returning from the break, the visitors took the lead for the first time in this game. But Fiorentina changed the momentum at the very last moment. They leveled again by scoring a beautiful goal in the 71st minute. In addition, they scored a winning goal in the injury time of the match. Milankovic was the goalscorer in the 93rd minute. With his goal, Fiorentina knocked out Atalanta and secured the semifinals of the Coppa Italia.