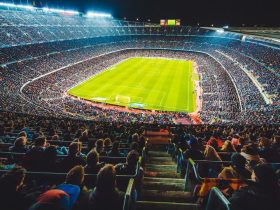 The first El Clasico of the season took place at Santiago Bernabeu last night, where Real Madrid smashed Barcelona with three goals. It is the first defeat of the season for FC Barcelona, which moved them to second place at the point table. Meanwhile, Real Madrid stand on the top after winning the El Clasico.

FC Barcelona are having a difficult time. They are on the edge of being knocked out of the UEFA Champions League. Therefore, they wanted to win El Clasico to get their rhythm back. But Real Madrid didn’t let it happen at the Santiago Bernabeu.

Two managers from both sides set up the same formation of 4-3-3 in this match. Barca boss Xavi Hernandes deployed Robert Lewandowski, Raphinha, and Ousmane Dembe in the front. On the other side, Karim Benzema led the attack of Real Madrid with Valverde and Vinicius Junior.

As the home team, Real Madrid dominated the first 20 minutes. They were pressing the visitors highly. As a result, Real Madrid didn’t have to wait much to take the lead. Striker Karim Benzema scored a brilliant goal in the 12th minute for the Los Blancos. However, Barcelona responded well after conceding the goal. But they couldn’t find the equalizer in the first half. Moreover, the Catalan club conceded once more as Federico Valverde doubled the lead for Real Madrid by scoring a goal in the 35th minute.

Barca boss Xavi Hernandes made some substitutions in the second half, which made a good impact on the pitch. Barcelona played better football in the second half than in the first half. But Real Madrid’s defense was rock solid. They didn’t concede any goal until the 80 minutes. But, due to Barca’s high pressing in the final ten minutes, Real Madrid conceded one. Ferran Torres scored that goal in the 83rd minute for Barcelona.

However, Barcelona made a mistake in injury time. Defender Erick Garcia fouled Rodrygo inside the box, which cost them a penalty kick. Brazil international Rodrygo stepped forward to take the spot kick and made no mistake. As a result, Real Madrid won the El Clasico by a 3-1 margin and are now top of the table.