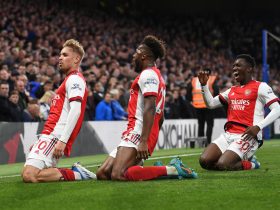 Everton is one of the oldest clubs in the English Premier League. This club has a massive fan base due to their glorious past. But in recent times, Everton are nothing like a threat to the big six clubs in the EPL. Everton failed to get into the top six at the league table for the last nine seasons.

Everton’s fans, however, hope to see their club return to its former glory. Leon Osman, the club ambassador and the former player of Everton, traveled to the US with the club as part of the pre-season tour. There he talked about the club’s future with Stake.com, the sponsor of Everton’s shirt.

“You always want to get off to a good start. Although the start isn’t everything: Everton’s start to the season last year was actually pretty decent. I think we had three wins out of four games and a draw in there with a start similar to this one. It was then the next period of the season where we really struggled.”

“And then, you are looking at every game, and thinking ‘Can we win that game?’ Although you want to start well, it is about consistently picking up points throughout the season. We fell into a hole, as you put it, in that second stage of games. It was as if the importance of the points was kind of forgotten. So it great to see us get back to that at the end of last season,” he added.

Don’t miss:  All you need to know about Finalissima: Argentina VS Italy

“I think Everton had a poor season last year; there is no getting away from that realization that we had to change the manager. We then brought in Frank Lampard and his team, and it took a few games to start seeing that system, and that set-up, start working. With the situation that team was in, needing to get results, to look back now and see that when we were under severe pressure, the team and the manager were able to get the results to manage to stay in the Premier League.”

Leon Osman said, “I think that is what we will look back on in regards to last season; under real pressure, we managed to achieve what we set out to, to stay in the Premier League, and we will try to take that mentality forward into this season.”

ON FRANK LAMPARD GELLING WITH THE NEW SQUAD ON THE TOUR

“I think it is really important that Frank and his team get a chance to work with this team all preseason. Obviously, Frank and his team came in at midseason, and they were always playing catch up. You are trying to figure out what kind of squad you have got, what kind of character, who can do this for you, who can do that. And that is all at the same time you are just trying to get results too: you are just trying to do your job.”

“So when you get to come away on a trip like we are now, you get to not only see team camaraderie, sometimes you can force it, you can initiate it. Sometimes you can sit back and let it happen. I think for Everton, to get them all in the same hotel, and on this trip together, it has been a lot of fun. We hope, like it did in my day, that they really take that forward into the new season: we hope that is the case this time.”

ON GETTING BACK INTO THE PREMIER LEAGUE EUROPEAN PLACES

“We hope that we can start to propel ourselves back to the top half of the Premier League. Whether it is a click your fingers type of moment, where we can end up as a top half team, I am not so sure. I think we are rebuilding towards that.”

“It is about progression. You are always trying to improve your team, and to achieve things, but it never works in a straight line. You have some moments where you go up, and somewhere you go backwards a step: there is no getting away from that, it was a big backward step last season. But you just started to see signs at the end that we could make progression. That will be in the minds of the manager and the players. ‘Can we take some more steps? Can we improve some more this season?”

ON PLAYING IN FRONT OF AMERICAN FANS

“It is very exciting to play in front of the USA fans, every time we come over here. I came over and played here in 2004, and we have been back many times since. It is just great to be here. We get to see the American Toffees, the American supporter clubs of Everton, and we get to try to make new fans as well, and new Evertonians.”

ON THROWING OUT THE FIRST PITCH AT A NATIONALS GAME

“I threw the opening pitch at the Nationals game when they played the Braves last week. That was amazing, honestly. A bit nerve-wracking: playing a sport I had never played before, and throwing the first pitch. But it went okay: I really enjoyed it.”

“They are my new team now, that is it. The Nationals are my team for life. We went to watch DC United as well. I have been up to a lot on this tour. I have got a chance to see the differences in match day preparation, which has been brilliant.”

Everton will host Chelsea FC at Goodison Park on August 6. It will be their very first match of the new Premier League Campaign. In the home match, Everton are very confident about getting three points at their home ground.