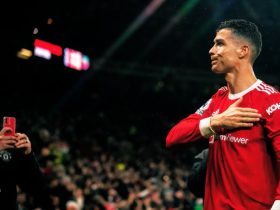 English team Manchester United are ready to play their final match in Group E of the UEFA Europa League against the table topper, Real Sociedad. Man United have already arrived in Spain to play tonight.

Real Sociedad are the only team in Group E to win all five games. With 15 points, Real Sociedad are now at the top of the table. Moreover, they defeated Manchester United at Old Trafford with a 1-0 margin.

On the other hand, Manchester United made a brilliant comeback after the disappointing loss against this Spanish side. Man United won four of the following games, which secured their place in the Round of 16. However, Man United are three points behind the table topper. Therefore, Manchester United need to win tonight’s clash with a minimum of two goals margin.

Manchester United have a strong away record in the UEFA Europa League. They have won six of their last seven away games in this tournament, having scored 19 goals in these games. However, it won’t be easy for the Ten Hag boys to defeat Real Sociedad at home. Real Sociedad have won their last two matches in their home. They are now looking to get their third successive win tonight.

Manchester United are having some serious injury problems in their squad. Raphael Varane missed United’s last two games as he became injured during the match against Chelsea. The France international will not be available before the Word Cup break.

Moreover, Jadon Sacho and Antony are not part of the squad ahead of tonight’s clash. Jadon Sancho is ill. Antony missed the match against West Ham United and hasn’t recovered yet.

However, Anthony Martial is a long absentee for the Red Devils. But he has trained with the team. According to the manager, he needs more time to get match fitness so he can play tonight. But the good news is Aaron Wan Bissaka is fit and ready to play tonight as a backup for Diogo Dalot.

On the Real Sociedad side, they will also miss some key players. Mikel Oyarzabal, Umar Sadiq, Mohamed-Ali Cho, David Silva, and Ander Martin will not be available tonight.