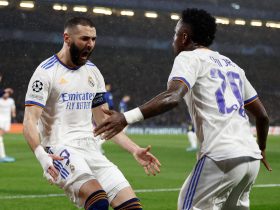 French club Paris Saint Germain have won two successive matches in the UEFA Champions League. Last night, they faced Maccabi Haifa in their 2nd match and sealed a victory at Sammy Ofer Stadium. However, PSG conceded the first in this game, but they returned three goals to win the match.

Last night, Paris Saint Germain traveled to Israel to play against the home team, Maccabi Haifa. It’s their second match in Group H. However, the PSG boss Christophe Galtier deployed his best possible XI against the Israeli side. The manager set up the team formation with 3-4-2-1. He used three center-backs with two wing-backs. Galtier used Kylian Mbappe as the center-forward, while the manager played Lionel Messi and Neymar just behind Mbappe. On the other side, the Haifa manager played his team in a 5-3-2 formation.

However, the home team played really well against PSG, one of the strongest teams in this tournament. They created several chances in the first half. However, Paris Saint Germain also pressed the home team. But Maccabi Haifa stunned the visitors in the 24th minute as Tjaronn Chery scored a brilliant goal with the help of D. Haziza.

After conceding the goal, the French side became desperate to find the equalizer. Lionel Messi and Neymar tried hard to create good chances. Finally, they equalized in the 37th minute as Lionel Messi found the net for PSG. With this goal, Messi has become the first player in UCL history to score in 18 successive seasons. Moreover, he scored against 39 opponents, more than anyone.

However, the half-time ended in a 1-1 tie. Paris Saint Germain became more aggressive after returning from the break. But Maccabi Haifa defended the first 20 minutes of the second half well. Unfortunately, they lost track in the final 20 minutes. In the 69th minute, Kylian Mbappe broke Haifa’s defense to score a goal for PSG. Lionel Messi, who scored the first goal, assisted on this goal.

Moreover, Neymar Jr. scored the third one just before the full-time whistle. In the end, Maccabi Haifa failed to score, so PSG won 3-1 and topped Group H.