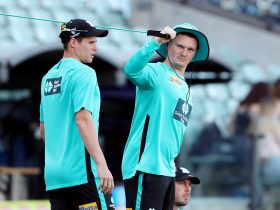 Bangladesh Women’s cricket team have won two successive games to go to the top of the table in Group A. As part of the ICC Women’s T20 World Cup Qualifier, they played Scotland Women last night at Sheikh Zayed Stadium, where Bangladesh beat Scotland by 6 wickets. Bangladeshi bowler Shohely Akhter became the Player of the Match for taking four wickets in this match.

Kathryn Emma Bryce, the captain of the Scotland Women, won the toss at Sheikh Zayed Stadium and decided to bat first. Therefore, Scotland started their batting innings with Ailsa Lister and Saskia Horley. But both openers couldn’t get a flying start for the team. Scotland lost their first wicket in the 2nd over as Sanjida Akter bowled out Ailsa Lister.

After that, the skipper came off the pitch and tried to build a partnership. Saskia Horley, unfortunately, couldn’t stay long as she left the crease after being run out in the 4th over. The Scottish skipper also failed to contribute much to the team. However, Lorna Jack tried hard to pick runs in the middle order. She scored the highest 22 runs for the team. Eventually, Nahida Akter bowled her out in the 18th over to end her innings.

Due to the aggressiveness of Bangladeshi bowlers, Scotland lost all of their wickets in 19.3 overs, scoring only 77 runs. Bowler Shohely Akhter picked up four wickets alone to destroy Scotland Women’s team.

Defending the score, Scotland had a great start. They got an early wicket as Rachel Slater picked up Shamima Sultana. But, Murshida Khatun made a brilliant partnership with the skipper, Nigar Sultana. Together they added 38 runs on the scoreboard.

Although Murshida Khatun lost her wicket after scoring 15 runs, Nigar Sultana continued picking runs with Romana Ahmed. They also made a partnership that helped the team to chase the target. Nigar Sultana and Romana Ahmed added 22 runs together. With five boundaries, Nigar Sultana scored the highest 34 runs for Bangladesh from 43 balls. On the other side, Romana scored 11 off 7 balls to secure the victory against Scotland.