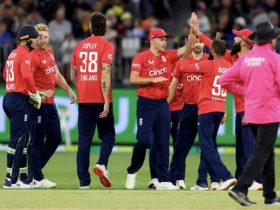 Harmanpreet Kaur, the captain of India Women, won the toss and decided to bowl first against the English lioness. So, England started their batting innings with Imma Lamb and Tamsin Beaumont. Both batters were very slow on the crease. They played defensively from the beginning of the match.

Unfortunately, they couldn’t make a decent partnership despite being so defensive. England lost their first wicket in the 8th over as Emma Lamb departed the pitch after scoring only 12 runs. Tamsin Beaumont also followed the same path in the following over. After that, Sophia Dunkley tried to build a partnership with Alice Capsey. Together they added 43 runs on the scoreboard. But Alice Capsey then lost her wicket to Sneh Rana. After a while, Sophia Dunkley left the pitch after scoring 29 runs.

Don’t miss:  England Women are through the final

It seemed England could become all out before 150 runs. But Danni Wyatt and Alice Davidson-Richards played a crucial role for the home team. Dani Wyatt scored 43 runs from 50 balls before losing her wicket. On the other side, Alice Davidson kept picking runs on the scoreboard. She remained not out in 50 runs. Relying on her bat, England scored 227 runs in 50 overs.

Defending the score, England Women had a brilliant start. They picked up India’s first wicket in the very first over. But Smriti Mandhana, the other opener, was rock solid on the pitch. She made a brilliant partnership with the new batter, Yastika Bhatia. They added 93 runs together on the scoreboard.

After that, Yastika Bhatia lost her wicket to Charlie Dean in the 18th over. But she scored 50 runs before losing the wicket. Then Indian skipper Harmanpreet Kaur came into the crease and built another strong partnership with Smriti Mandhana. They added 99 runs on the 3rd wicket. Smriti Mandhana, unfortunately, lost her wicket after scoring 91 runs. But the skipper remained not out in 74 runs. Therefore, India chased the target within 45 over.