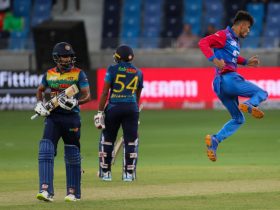 Afghanistan have come to Bangladesh to play a three-match ODI series. Yesterday, they faced the home team in the first match of the series. Although Bangladesh lost six wickets early in the game, they won it surprisingly. Afif Hossain and Mehedi Hasan Miraz made a brilliant partnership on the seventh wicket that earned the victory for the home team.

At Zahur Ahmed Chowdhury Stadium, the Afghanistan captain Hashmatullah Shahidi won the toss and has decided to bat first. Rahmanullah Gurbaz and Ibrahim Zadran started the innings for the visitors. But their starting wasn’t good enough as they lost the first wicket in 11 runs. Rahmanullah Gurbaz had to go back to the pavilion in the 3rd over.

Then Ibrahim Zadran made a partnership of 45 runs with the new batsman, Rahmat Shah. They were looking good on the pitch. But pacer Shoriful Islam didn’t make them a long partnership. He took the wicket of I. Zadran. On the other side, Rahmat Shah scored 34 runs before losing the wicket to Taskin Ahmed.

Don’t miss:  India have been knocked out as New Zealand secured the semi-final

However, the visitors lost some quick wickets after 20 overs. Najibullah Zadran was the only batsman to get a half-century for the Afghan. Before going back to the pavilion, he added brilliant 67 runs on the scoreboard. But the remaining batsmen couldn’t score notable runs. As a result, Afghanistan became all-out in 215 runs. Bangladeshi pacer Mustafizur Rahman took three wickets of Afghanistan. Taskin, Shoriful, and Shakib got two as well.

Chasing down a low target in the first ODI, Bangladesh were in big trouble as they lost some quick wickets at the beginning of the match. In the 3rd overs, the home team lost two wickets. Liton Das and Tamim Iqbal had to go back to the pavilion in that over. Moreover, Bangladesh lost two more wickets in the 5th over.

The home team was in real trouble to face the bowling attack of the Afghans. Due to the aggression of the Afghan bowlers, Bangladesh lost six wickets in 45 runs. Then, Afif Hossain and Mehedi Hasan Miraz came into the pitch and played very carefully. They both tried to build a partnership. Finally, both made a match-winning partnership on the seventh wicket. They added 174 runs together on the scoreboard that earned the victory for Bangladesh.