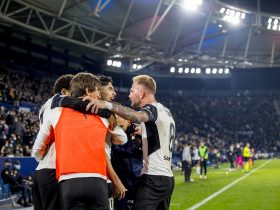 A tough challenge for FC Barcelona is coming up on Sunday, where they will face their biggest rival, Real Madrid FC, at Santiago Bernabeu. Taking place at Madrid’s stadium, this will be the first El Clasico of the season. The match is also crucial for both parties to make a difference in the standings.

Real Madrid and Barcelona earned equal points (22) from the first eight matches in La Liga. Both teams won seven games and tied the remaining one. The team that wins Sunday will be three points ahead of the second-place team.

FC Barcelona splashed around 145m euros in the last summer transfer window despite having poor financial conditions. They signed several big names, such as Robert Lewandowski, Raphinha, Jules Kounde, and many more. As a result, these players made a good impression in the league. Barcelona are now considered one of the top contender for the league.

Moreover, Barcelona have conceded only one goal so far and scored 20 goals in La Liga. Although the statistics are impressive, the football expert still doubts Barcelona’s probability of defeating Real Madrid. There are plenty of reasons behind it.

Barcelona didn’t concede a single goal in their last six league games, where they played against the teams like Real Valladolid, Cadiz, Elche, and Real Mallorca. Cadiz and Elche are the two teams from the bottom of the table. It was easy for Barcelona to beat these teams.

But Barcelona faced a real challenge while playing in the UEFA Champions League. They conceded seven goals in four matches there. Moreover, Barcelona won only one game, losing two and drawing one. As a result, Barcelona are on the edge of being eliminated from the group stage. Barcelona lost against Inter Milan and FC Bayern Munich in the UCL. Thus, football experts believe Barcelona has a long way to go before they compete with the top teams.

On the other hand, Real Madrid have been consistent since the last season. They have a balanced squad on the team. The Los Blancos already defeated Atletico Madrid in La Liga. However, Real Madrid will play at home against Barcelona on Sunday. Real Madrid has all these advantages, but anything can happen on the field.