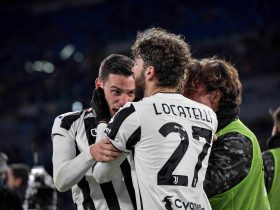 Juventus have won a thrilling match against the home team, Empoli. Their new acquisition, Dusan Vlahovic, keeps scoring goals for the team. Last night, he scored two goals to beat Empoli at Stadio Carlo Castellani. The victory keeps Juventus in the top four. With 50 points, the Andreazzoli boys are standing in 4th place at the league table. On the other hand, Empoli went five games without a victory. They have lost three of their previous five league games. As of right now, Empoli are 13th in the league.

The Italian giant Juventus traveled to Stadio Carlo Castellani to play the 27th league game in Serie A. Juventus boss Aurelio Andreazzoli set up the team formation with 4-4-2. He used the new signing, Dusan Vlahovic, with Moise Kean in the front. On the other hand, the home team manager played his team in a 4-2-3-1 formation.

However, both teams played attacking football from the beginning of the match. But, the audience had to wait until 32 minutes to see the first goal. The Juve forward Moise Kean netted the first goal in the 32nd minute with the help of A. Rabiot. Anyway, the home team did not take much time to find the equalizer. Within seven minutes, Empoli leveled with the visitors as the midfielder, Szymon Zurkowski, scored the goal in the 39th minute. It seemed the first half ended in a 1-1 tie. But Juventus new signing Dusan Vlahovic netted the ball just before halftime. He found the net in 45+2 minutes. As a result, the visitors ended up with a one-goal advantage in the first half.

Returning from the break, the home team desperately tried to equalize again. They kept pressing the visitors. But, the defense line of Juventus was solid at the Stadio Carlo Castellani. Moreover, the Andreazzoli boys scored their third goal in the 66th minute. Dusan Vlahovic, who netted the second goal of Juventus, scored the third one as well. Alvaro Morata helped him to score this goal.

The home team made the match more exciting by scoring a goal in the 76th minute. Empoli striker La Mantia found the net for the team. Unfortunately, they couldn’t score more in the remaining minutes. As a result, Juventus sealed the victory against the home team, Empoli. Italian giant AC Milan have been destroyed by Lazio at ... Italian team Juventus FC are one of the most successful ...