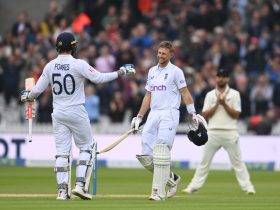 The football world witnessed a thrilling match last night between England and Germany. In their sixth match of the UEFA Nations League, England hosted Germany at Wembley Stadium, where neither team sealed victory nor lost. The high-voltage clash ended in a thrilling 3-3 tie. However, the draw has moved England to the bottom of the point table in Group 3, while the Germans stand one step forward than England. Aside from that, both teams are in fear of being eliminated from the tournament.

England are the only team in Group 3 that haven’t won a single game in the UEFA Nations League. So, England were desperate to get their first victory while facing the Germans at Wembley Stadium. In this crucial match, both managers from the two sides played their best possible XI.

England boss Gareth Southgate set up the team formation with 3-4-2-1. He used Reece James and Luke Shaw as the two wing-backs, while Harry Maguire, John Stones, and Erick Dier played as the center-backs. Harry Kane played in the front. On the other hand, German boss Hensi Flick played his team in a 4-2-3-1 formation.

Both teams played equally well in the first half. But England got tremendous support from the gallery as they are the home team. But both sides failed to score in the first half. Returning from the break, Germany started dominating. They pushed the home team and created many chances. Therefore, Germany got a penalty kick as Harry Maguire fouled Jaman Musiala inside the box. Ilkay Gundogan took that kick and made no mistake.

Scoring the goal, the Germans became more aggressive. They doubled their lead within 15 minutes. This time, Kai Havertz scored that goal for the Germans. However, Luke Shaw gave a lifeline to England by returning a goal in the 71st minute. That goal boosted the home team’s performance. Within four minutes, the Three Lions found the equalizer as Mason Mount scored a stunning goal in the 75th minute.

The drama wasn’t over there. The home team got a penalty kick at the very last moment. Harry Kane stepped forward to take the kick and made no mistake. Therefore, England took the lead for the very first time in this match. It seemed England were winning the game. But they conceded another one just before three minutes of the final whistle. Kai Havertz found the net in the 87th minute for the Germans. As a result, the match ended in a thrilling 3-3 draw. There was a lot of drama last night in Group ...