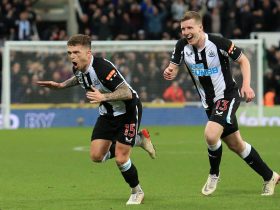 Manchester City’s new signing, Erling Haaland, just can’t stop scoring. He hits back-to-back hat-trick for Manchester City. Last night, the Norwegian scored three goals to defeat Nottingham Forest at Etihad Stadium. Haaland has created a record with this hat-trick. He becomes the first player after Sergio Aguero to score nine goals in the first five matches for Man City. Furthermore, Manchester City have scored 18 goals in their first five games, the most in their history.

Man City welcomed Nottingham Forest at Etihad Stadium to play their fifth game in the Premier League. The City boss Pep Guardiola played his team in a 4-3-3 formation, where he deployed Julian Alvarez and Phill Foden with Erling Haaland in the front. The manager benched Kevin de Bruyne to give him rest. On the contrary, the Forest manager set up the team formation with 5-3-2. He used five defenders against the Citizens.

Like the previous games, Manchester City started pressing the opponents from the very start. Their one-to-one passes destroyed the defense line of Nottingham Forest. As a result, the home team didn’t have to wait much to take the lead. Striker Erling Haaland scored the first goal of the match in the 12th minute. The Norwegian doubled the scoreline with a stunning goal 11 minutes after the first one. Everything seemed easy for him as he scored another brilliant goal to complete his second hat-trick in the English Premier League. He scored that goal in the 38th minute with the help of Jones Stones.

The first half ended with a 3-0 score, with the visitors unable to score. Returning from the break, Man City kept the same tempo as they did in the first half. Joao Cancelo started scoring in the second half as he found the net in the 50th minute. After that, Julian Alvarez, another new summer signing of Man City, came to the spotlight. In the 65th minute, the Argentine scored a stunning goal to make the lead 5-0. He also scored his second goal of the match just three minutes before the final whistle. As a result, Manchester City won the match with a massive 6-0 margin against Nottingham Forest.