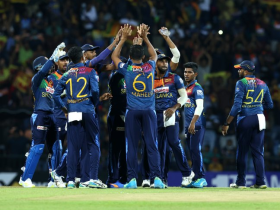 Sri Lanka have qualified for the Super Four

West Indies have welcomed New Zealand to play a three-match T20 series at their home. The series started last night at Sabina Park, where New Zealand defeated the home team by 13 runs. Spinner Mitchel Santner became the Player of the Match for taking three wickets for the Black Caps.

Nicholas Pooran, the captain of the West Indies, won the toss at Sabina Park and decided to bowl first. So, New Zealand started their batting innings with Martin Guptill and Devon Conway. It was an aggressive start for the Black Caps as both batsmen tried to hit every ball they faced. Devon Conway was a bit more aggressive than Guptill. However, they added 62 runs in the opening partnership.

After that, Martin Guptill lost his wicket to Odean Smith in the 8th over. Moreover, Odean Smith also picked up Devon Conway on the next ball. Conway scored 43 off 29 balls before his departure. Then Kane Williamson tried to make a partnership with Glenn Phillips. They added 36 runs together on the scoreboard. Unfortunately, their partnership couldn’t go far as Glen Phillips lost his wicket in the 12th over.

Kane Williamson continued to pick up runs consistently. He made another partnership of 46 runs with the new batter, Daryl Mitchell. However, Williamson’s brilliant innings came to an end in the 18th over. But he added the highest 47 runs on the scoreboard before the departure. In addition, James Neesham scored a destroying 33 runs only from 15 balls, which helped New Zealand to score 185 runs in 20 overs.

Chasing the target, West Indies lost their first wicket in the 2nd over. Opener Kyle Mayers departed the pitch after scoring 1 run. But Sharmarh Brooks kept adding runs. Before the departure, he added 42 off 43 balls. However, Caribbean skipper Nicholas Pooran was very aggressive on the crease. It seemed he could change the scenario. But he couldn’t continue as Mitchell Santner picked up his wicket in the 5th over. Romario Shepherd also tried to play attacking. Moreover, he remained not out in 31 runs. But the remaining batters couldn’t contribute enough to chase the target. So, their innings ended in 172 runs, and New Zealand won the match by 13 runs.