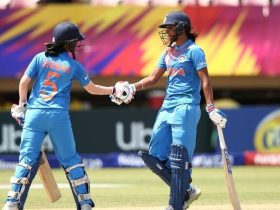 Bangladesh have white-washed West Indies in the three-match ODI series. Bangladesh sealed the series by winning the first two matches. Last night, they completed the white-wash by defeating the home team at the Guyana National Stadium. Bangladeshi spinner Taijul Islam won the Player of the Match award for taking five wickets of West Indies. Furthermore, Tamim Iqbal became the Player of the Series for his brilliant performance throughout the series.

In the 3rd ODI, Bangladeshi skipper Tamim Iqbal won the toss and decided to bowl first. Bangladesh made just one change in the squad as they replaced Taskin Ahmed with Taijul Islam. On the other hand, West Indies replaced Kyle Mayers with Brandon King.

However, Shai Hope and Brandon King started the batting innings for West Indies. But they hadn’t had a good start. Like the previous two matches, they also failed to make a long partnership. In the 3rd over, West Indies lost their first wicket as Taijul Islam picked up Brandon King. It became very difficult for the batters to face Taijul Islam. He made unbelievable swings when he delivered the ball. As a result, he got another wicket in his second over. This time, Shai Hope departed the pitch after scoring only two runs.

Anyway, Keacy Karty and skipper Nicholas Pooran tried to make a resistance in the middle order. Slowly but continuously, they were adding runs on the scoreboard. Keacy Karty stopped in 33 runs, while Nicholas Pooran lost his wicket to Taijul Islam after adding 73 runs. After that, the remaining batters of the West Indies couldn’t contribute enough. As a result, West Indies became all out in 178 runs.

Chasing the small target, Bangladesh also failed to get a good start. Opener Najmul Hasan Shanto left the pitch in the 6th over. Then, Tamim Iqbal made a partnership with the new batter, Liton Das. Together they added 50 runs on the scoreboard. Unfortunately, Tamim lost his wicket in the 17th over. But Liton Das didn’t miss to get the half-century in this match. Although Bangladesh lost some quick wickets, Nurul Hasan added some crucial runs in the lower order to chase the target. Relying on his 32 runs, Bangladesh chased the target in 49 overs, losing six wickets. As a result, Bangladesh won the third ODI by 4 wickets.