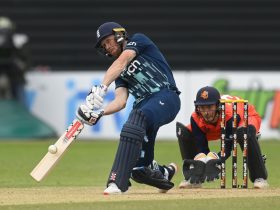 England won the series against the Netherlands

National teams are busy playing the FIFA World Cup Qualifier. Football World Cup is considered the biggest show on earth. So that everyone wants to participate in this event. Teams are playing the qualifiers to get a chance in the Qatar World Cup. Some big names have played the qualifier matches on Wednesday night. While Italy have created another history of 37 unbeaten runs in the history of football.

Wednesday night Italy set a new record of 37 games unbeaten run by defeating Lithuania. The Euro Champion is in good form. Manager Roberto Mancini has built a team that is very passionate about football. Last night they scored five goals against Lithuania. Striker Moise Keane scored a brace while G. Raspadori and Di Lorenzo scored one goal each. Lithuania conceded an own goal also. In the last three matches, Italy conceded only one goal and scored six.

Under Hansi Flick, Germany are back in attacking football. The Germans are famous for attacking football. But they somehow couldn’t play like this for a certain time. Then the former coach of FC Bayern Munich took charge of German National Football teams. Since then, the team has started playing attacking football again. Last night, Germany scored four goals against Iceland. Serge Gnabry opened the score sheet at the very beginning of the match. He found the net in just the 4th minute of the game. The other three goals came from different scorers. They are, Antonio Rudiger, Leore Sane, and Timo Werner. On the other hand, Iceland couldn’t break the defense line of Germany.

The match between England and Poland has been drawn. Despite having more positions in the game, England couldn’t win the match. Both teams didn’t find the net in the first half. In 72 minutes, English star Harry Kane scored from K. Walker’s assists. But Poland tried to equalize the match. At the additional time of the match, Poland scored their only goal of the match. Midfielder Szymanski scored in 90+2 minutes from Robert Lewandowski’s assists. In the last three games of the World Cup Qualifier, England scored nine goals and conceded only one.