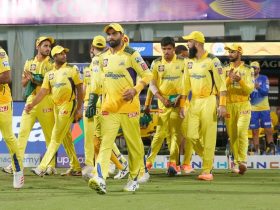 Chennai Super Kings secured the first victory in the IPL

Kolkata Knight Riders won an unbelievable match against Mumbai Indians. They were on the edge of losing the game. Guess what happened then? Pat Cummins, the Aussie pacer, came in and played a destroying innings to rescue the Kolkata Knight Riders. He hit the half-century only from 15 balls, which is one of the fastest fifties in the history of the Indian Premier League. Relying on his bat, the KKR beat the Mumbai Indians by five wickets. Moreover, this victory keeps the KKR on the top of the table with six points.

After that, Ishan Kishan made a partnership of 39 runs with the new batter, Dewald Brevis. But, they couldn’t make a fruitful partnership as Dewald Brevis departed in the 8th over. Ishan Kishan also went back to the pavilion after scoring only 14 runs. However, Surya Kumar Yadav played a very crucial innings in the middle order. He added 52 runs from 36 balls. Before losing the wicket, he hit five boundaries and two sixes. At the last moment, Kieron Pollard accelerated the pace of picking runs. He scored a quick 22 run from 5 balls only. As a result, Mumbai Indians set a target of 162 runs for the KKR.

Chasing the target, Kolkata Knight Riders lost the first wicket in 16 runs. Ajinkya Rahane departed after scoring 7 runs. On the other side, Venkatesh Iyer played carefully against Mumbai’s bowler. He tried to build a partnership, but the remaining batters didn’t stay long on the pitch. Mumbai Indians picked up three wickets quickly. As a result, it seemed Kolkata Knight Riders were losing the match. Then Pat Cummins came into the pitch. In the 16th over, he picked up 36 runs with four sixes and two fours. That over was the turning point for Kolkata Knight Riders. In 16 overs, the KKR chased the target thanks to his heroic innings.